Gail Deculus-Johnson, owner of Sable Images, is a vanguard American who collects objects in one of the most provocative areas of collecting in America – Black Memorabilia. Gail has a contagious passion for African-American memorabilia. Gail was a collector long before starting Sable Images in 1995. Gail believes that Black memorabilia adds dimensions of value and meaning when understood in proper historic and cultural context. Gail’s goal is to show the world untold history through uncensored, undocumented portrayals and depictions of the African-American experience.

Gail is a memorabilia enthusiasts and “underground historical Black memorabilia ” conductor at Sable Images. At, her previous extraordinary Los Angeles-based gift store, she specialized solely in African-American memorabilia to buy, sell and trade. Gail’s adventurous mission is to find, expose, and share with others “the good, bad and ugly” depictions of African Americans, while unveiling their historical truth. She believes that purchasing and displaying Black Memorabilia as art or home decor (“living with it”) is vital to the education process. Having memorabilia as part of a home, no matter how derogative or painful, ensures that “each one teaches one,” that African-American forefathers are recognized for their endurance, and reassures us that America’s most shameful legacy will not repeat itself!

Gail is truly “walking the talk.” Gail is revealing and sharing the true historical record of contributions by African Americans that have been often denied and/or omitted from America’s educational system. She understands that there are various thoughts on this controversial issue, and that collecting Black memorabilia may arouse emotions one way or another. For this energetic senor female, the longing to claim and maintain ancestral awareness of the legacy of enslavement runs deep. 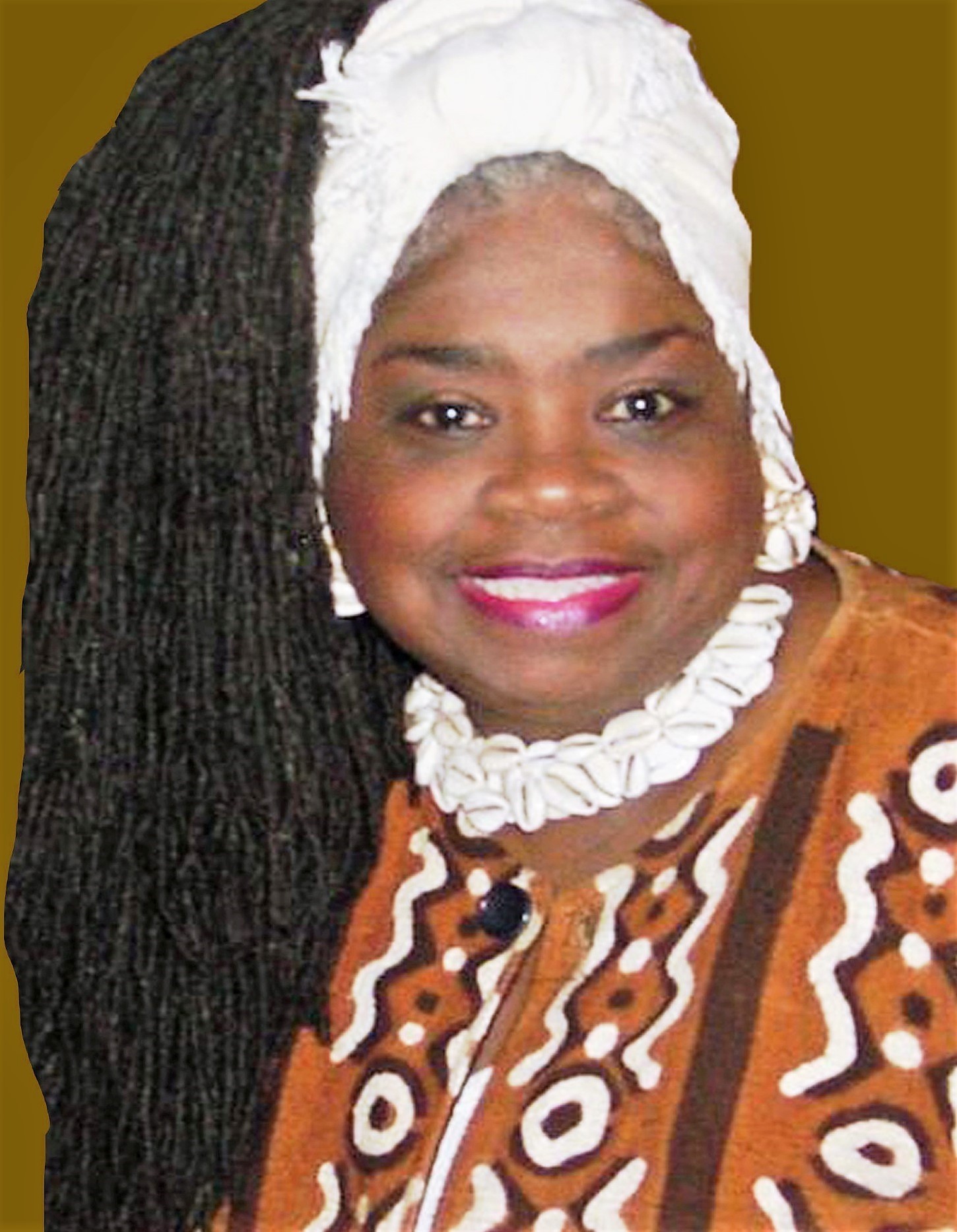 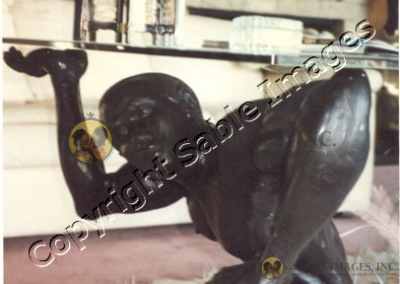 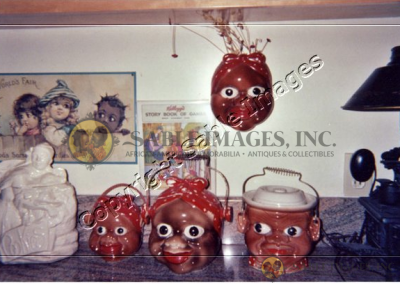 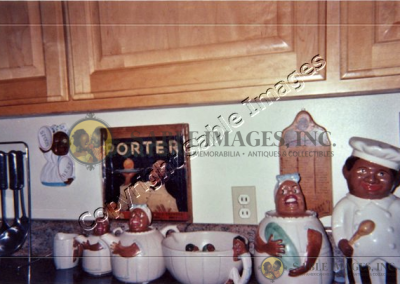 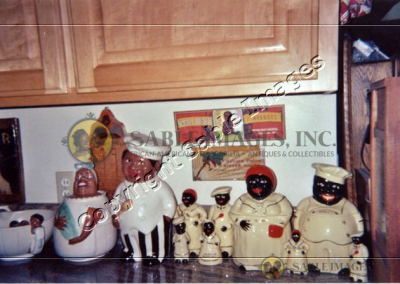 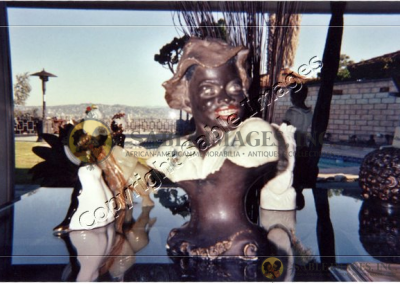 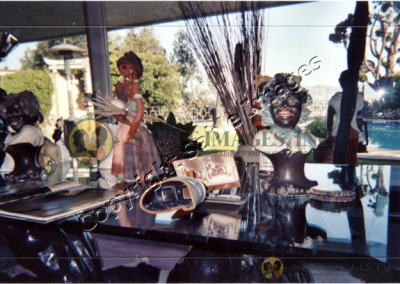 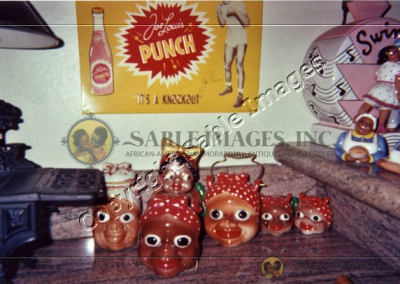 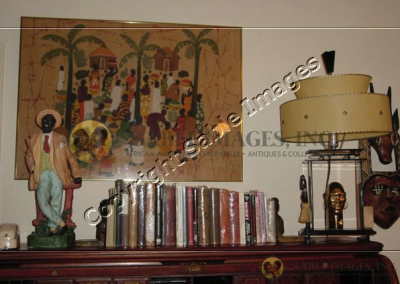 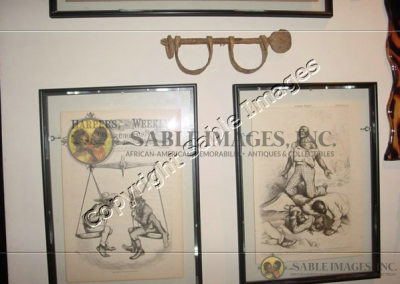 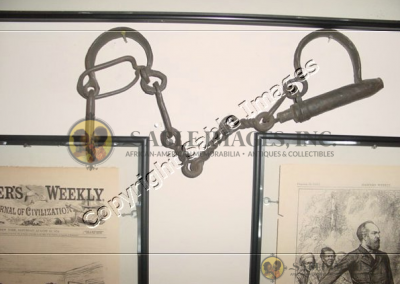 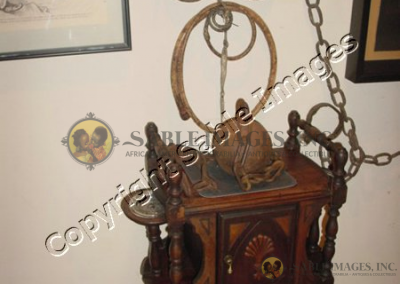 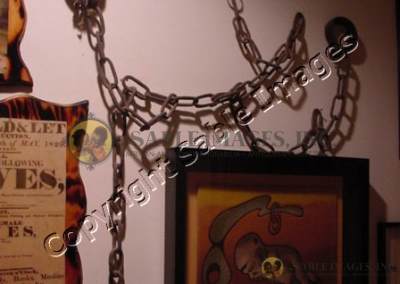 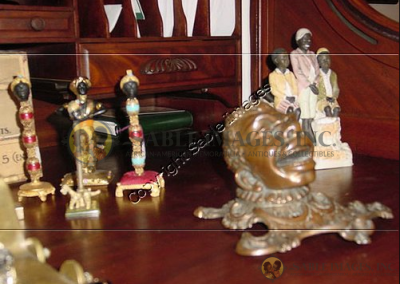 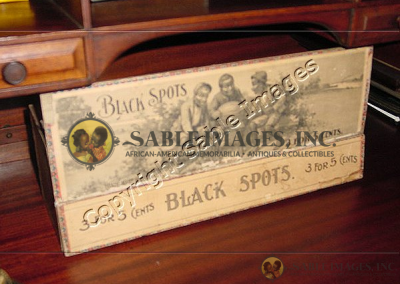 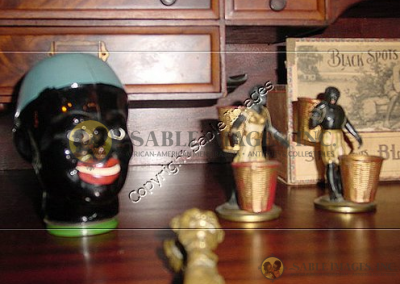 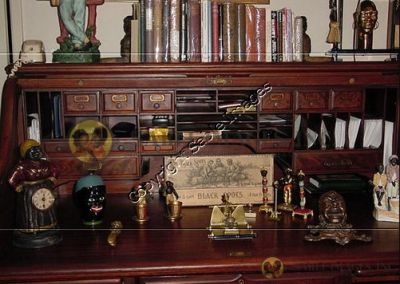 Read about Sable Images below: 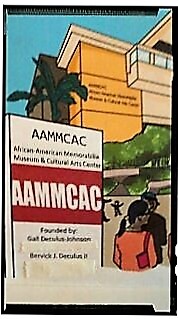 PENDING PROJECT
The owner of Sable Images, Gail Deculus-Johnson has a vision to extend enriched ancestral cultural consciousness, the creation of an emerging nonprofit organization “African-America Memorabilia Museum & Cultural Art Center” (AAMMCAC) with a build out and launch of an ONLINE African-American Memorabilia Museum.  The massive collection on depictions of life experience of African descendants will enable participants to see and be emotionally touched.

“Sable Images has been entrenched in DISCOVERING, PRESERVING, SHARING, AND INSPIRING youth and adults to seek “undeniable truth” relating to “his story.”  With continued devotion to uncovering and promoting American history, Black heritage and cultural preservation AAMMCAC (a nonprofit organization) welcomes any support, sponsorship, investors, and/or donations in any way, at any level, by any means possible. E-mail us at “info@aammcac.com”; any participation is appreciated.”

There is a spirit that burns within the African-American community – a strength and pride which four centuries of oppression have been unable to extinguish. After entering the doors of Sable Images, the most frequently asked questions were:

Where do you find this “stuff”?
Who really collects Black Memorabilia?
Some items are disturbing, offensive, and hard to believe, are you creating these images yourself?
Why should I show my children these politically incorrect depictions, is this teaching racism?
Is Black Memorabilia truly an investment?
What made you start this type of business?
How long have you been collecting?
I have old Black stuff from my grandmother, what can I do with it?
You look familiar; did I see you on television?

Q. Where do you find this “stuff”?

A. Yard and estate sales, swap meets, auctions, antique shops, an antique dealer’s network, and from anyone selling Black Memorabilia. The owners travel across the United States and have gone as far as Africa for certain items.

A. Black Memorabilia has been collected in America since the beginning of the 18th century. The unique and somewhat controversial items have intrigued collectors (mostly non-Black) for centuries. Today’s collectors are very diverse. They are students, blue collar workers, professionals, celebrities, and educators, coming from multicultural backgrounds. There is a wide range of antiques and memorabilia which reflect both the changing time of our country and the changes of attitude toward African Americans, which the items represent.

Q. Some items are disturbing, offensive, and hard to believe, are you creating these images yourself?

A. No, definitely not. Images of African-American struggle, shame, tolerance, pain, pride, and inspiration are exhibited as they are painstakingly gathered. At Sable Images one can expect to see the “good, bad, and ugly” in life experiences of African Americans. The online store contains hundreds of splendid mementos of what true life was like for people of African and Indian decent.

Q. Why should I show my children these politically incorrect depictions, is this teaching racism?

A. Displaying memorabilia as part of a home, no matter how painful it may seem, is ensuring that “each one teach one” and that history must not repeat itself. America’s youth must know where we have been to know where we are going. The African-American forefathers of this country must be given the recognition they deserve. Portrayals that people may now view as racist, negative, derogatory or discriminatory must be seen in a historical perspective.

A. Black Memorabilia is one of the fastest-growing and value appreciating categories in the art of collecting, greater than any other ethnic group’s images. Authentic artifacts relating directly to African Americans, or depictions of them were often destroyed or discarded in the concerted effort to erase their shameful presence. The scarcity and aged value is what makes collecting Black Memorabilia increasingly valuable monetarily and as collector items.

Q. What made you start this type of business?

A. After acquiring high school, graduate, and post graduate degrees, it was shocking to find materials/objects representing America’s past that were never taught in the education system. There was a burning desire to gain an even greater education about African-American ancestors. Factors that influenced the decision to transform my clandestine love for collecting Black Memorabilia into a business include:
An inquisitive interest in what true life was like for past generations of African Americans
A fascination with treasure hunting and an intrigue with uncovering the untold
A conscious impulse to enlighten, share and show others what was found.

Q. How long have you been collecting?

A. The owners have been collecting isnce 1982. It is a passion with an ongoing process of treasure hunting. Known to collectors as “antiquing,” the owners of Sable Images are constantly searching to find items primarily for their personal collection, not all items they find are for resale. Their dream is to have a museum.

Q. I have old Black stuff from my grandmother, what can I do with it?

A. Hold on to it and display your cultural family heirlooms, pass family memorabilia on to loved ones. One of the best and most cherished gifts that one can give is heritage and history. If you decide to sell Black Memorabilia, Sable Images does buy, trade, and sell.

Q. You look familiar; did I see you on television?

Sable Images supports and participates in community/memorabilia-orientated activities (domestic and international). Sable Images participates in multicultural activities to promote ethnic and racial respect and tolerance through its extraordinary exhibit of graphically striking and historically important artifacts of “signs of time gone by.”
Gail’s photo is featured in Bill Duke’s book Dark Girls, at selected events this book is sold and the photo page is autographed by Gail. 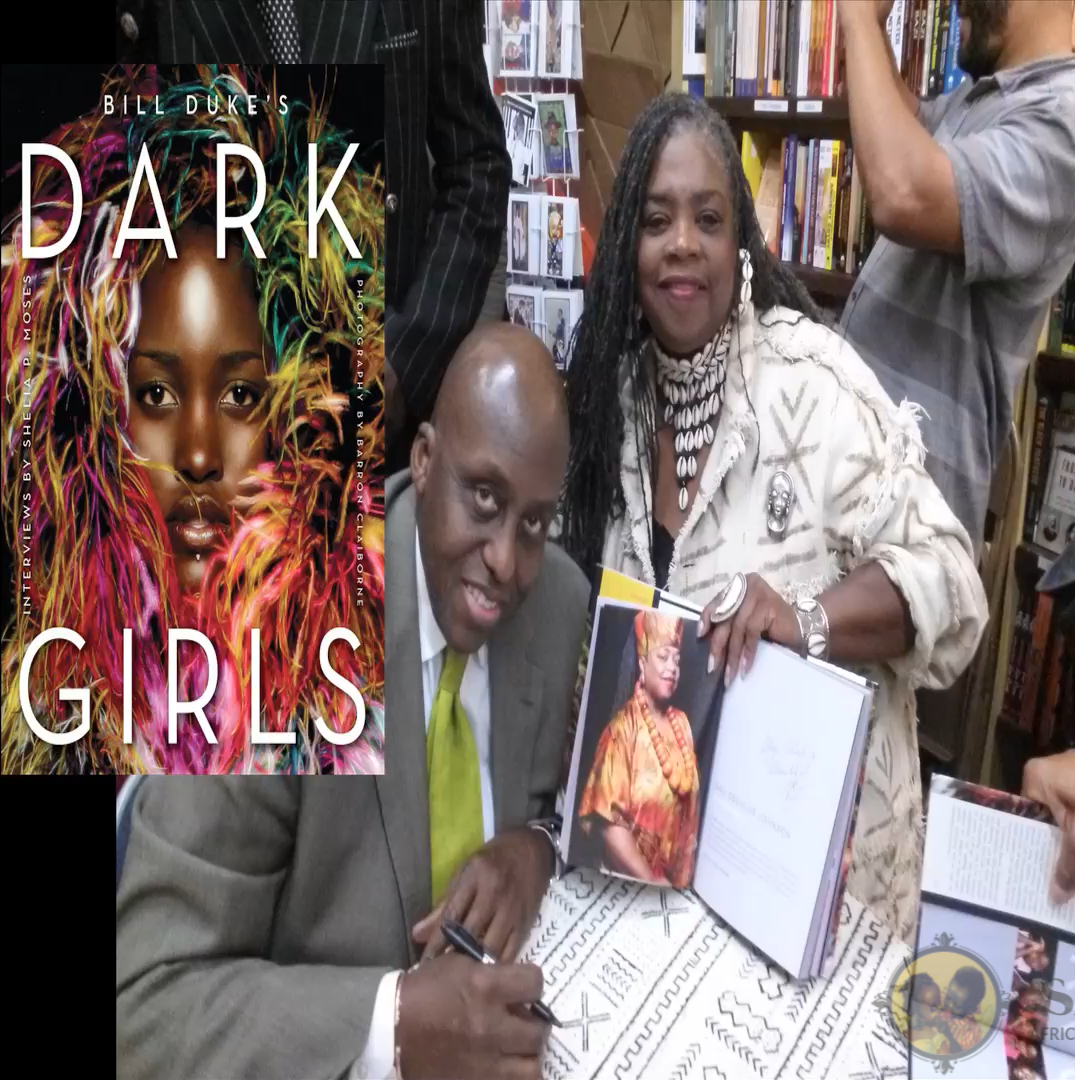 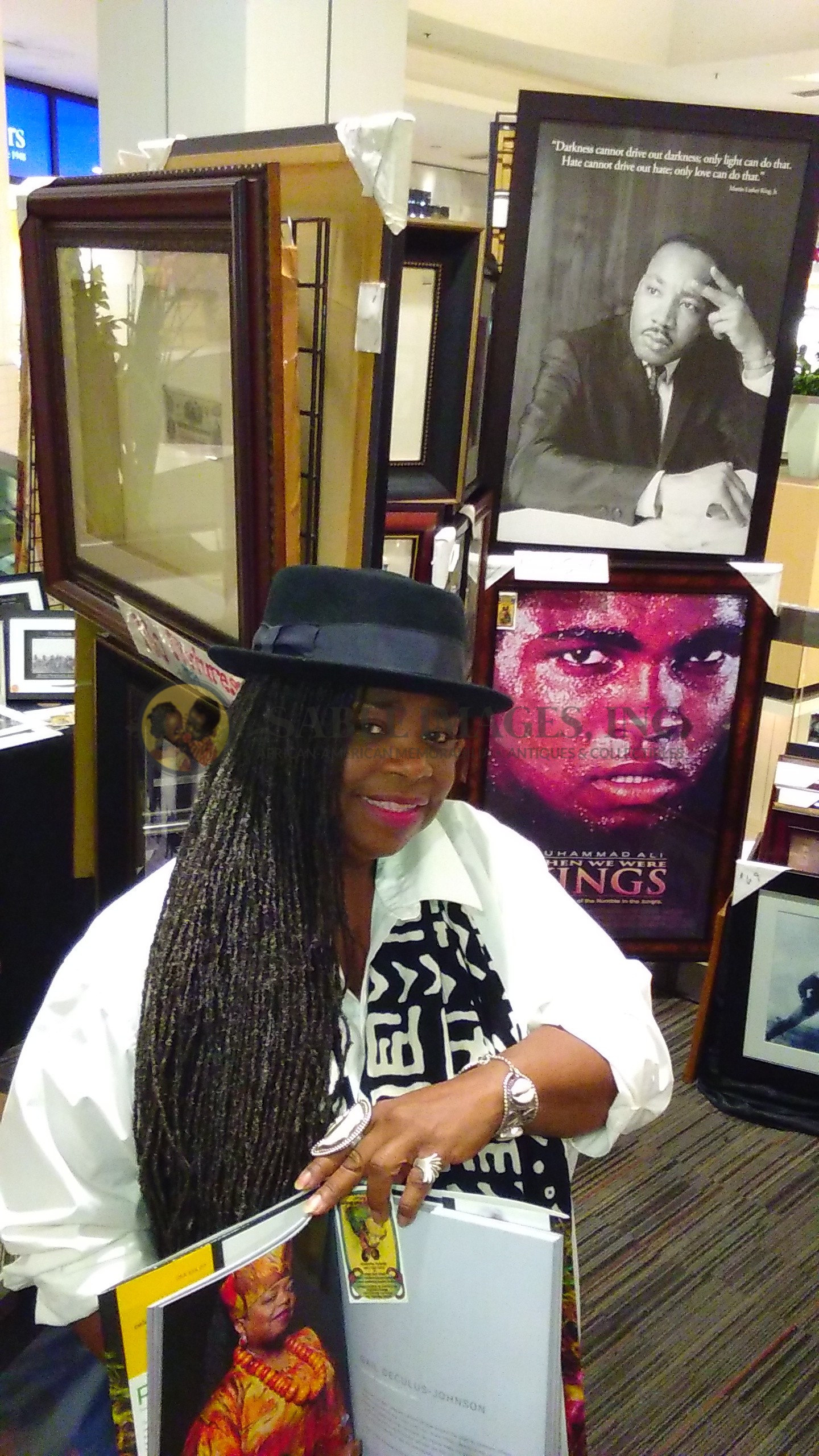 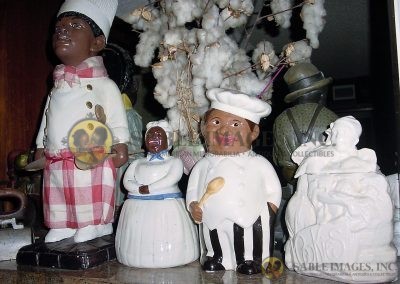 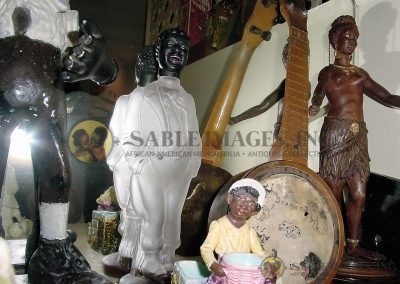 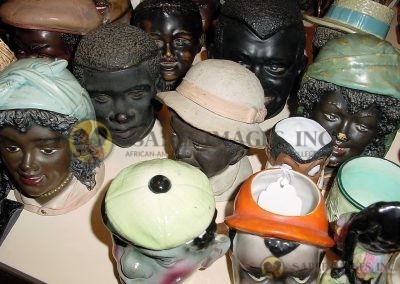 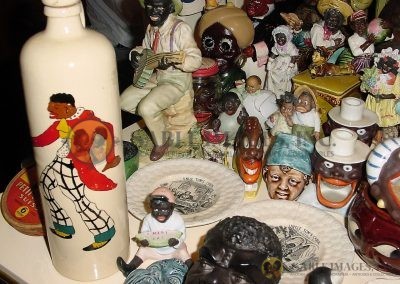 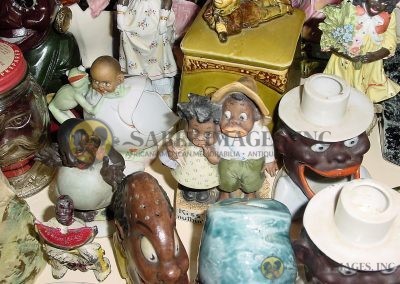 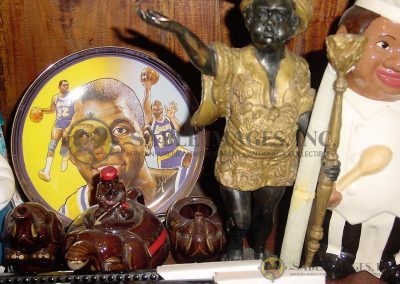